Father Tony is a native of Brecksville and grew up in St. Basil the Great Parish. He graduated from Assumption School in Broadview Heights and Walsh Jesuit High School in Stow before entering Borromeo Seminary and John Carroll University, where he majored in psychology and philosophy. At St. Mary Seminary, he earned a master’s degree in theology. He was ordained May 29, 1999, by Bishop Anthony M. Pilla.

For six years, he served at St. John Vianney Parish in Mentor. He next was assigned to St. John Neumann Parish in Strongsville and briefly served at St. Clare Parish in Lyndhurst before he was named pastor here in 2009.

The oldest of five children, Father Tony says he enjoys spending time with his mother, who still lives in Brecksville, and his siblings and their children. His family includes his brother Greg, married to Holly, and their three sons in Broadview Heights; his sister Jenny, married to Doug, and their two sons; his brother, Matthew, married to Melanie, and their daughters in Fairlawn; and his younger sister, Katie.

His father, Anthony J., a certified public accountant, is deceased.

Father Tony enjoys kayaking, gardening and attending Cleveland Orchestra concerts at Blossom Music Center and Severance Hall when he can. “I love to be outside,” he says. “I enjoy working in the yard. I think people should be drawn in by music, good homilies and a welcoming atmosphere.” 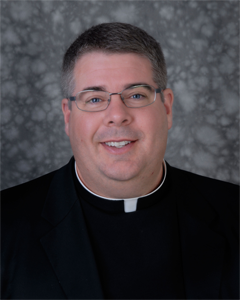