Jenny Bonarrigo was born and raised in Sharon Center, Ohio. Her parents were educators. Her father was the principal of the Sharon Elementary School for 25 years and her mother taught a specialized reading class. Jenny has two brothers, one a year older and one six years younger. Jenny graduated from Highland High School in 1974. She received an associate’s degree in Floriculture in 1976 from a branch of the Ohio State University in Wooster (ATI). In 2002, at the age of 47, Jenny returned to college part time to pursue a bachelor’s degree in psychology from the University of Akron. She graduated summa cum laude in 2008.

Baptized as an infant in the Lutheran tradition, Jenny attended St. Paul’s Lutheran Church in Sharon with her grandparents semi-regularly and was confirmed in the eighth grade. Thinking Confirmation was her graduation from church, Jenny did not practice any religion until she married her husband, Steve, and joined his large Italian Catholic family.

The celebrations of numerous Catholic baptisms, First Communions and weddings in the Bonarrigo family introduced Jenny to Catholicism.

In 1986, four years after the birth of their son Andy, Jenny realized that she owed God a debt of gratitude for the many blessings in her life. Catholic family members told her of a class that the Church offered on Catholic teaching and practice. And, as they say, the rest is history. Jenny entered the RCIA process and became a member of St. Francis Xavier Parish in 1987. She was a sponsor the following year, then joined the RCIA team and never left! In 1995, she was hired part time by SFX to coordinate an expanded model of the RCIA process that would be available year-round.

Jenny considers directing the RCIA her calling. It’s her vocation, second only to marriage and parenting. Jenny and Steve are also proud grandparents of Cadence, who shares Jenny’s date of birth! Cady is 9 years old and attends third grade at Barberton West Elementary School. Another beloved member of the Bonarrigo family is Mo, a 2-year-old Chihuahua. Relaxing with the family, gardening, flower arranging, doing home improvement projects, and playing with Mo and Cady combine to make Jenny’s life enjoyable, fulfilling and complete! 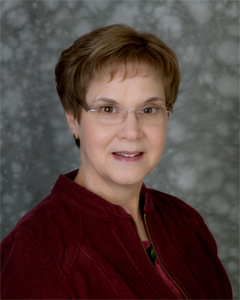