Deacon Joe was born June 27, 1947, in Salem, Ohio. He is the oldest of four, and has two sisters and a brother. He grew up across the street from St. Paul Church and was a member of the parish in Salem. His parents were very involved in the parish and the school, which he attended until the eighth grade.

He graduated from Salem High School in 1965, then joined the Navy Reserves and went on active duty in 1967. He was stationed in Danang, Vietnam, for one year, from September 1967 to September 1968.

He enrolled in Kent State University but, due to job moves, graduated from Youngstown State. His occupations included purchasing, sales and marketing.

He married Georgia in 1970 and they have lived in Salem, New Middletown, Cincinnati and, of course, Medina. They have two great children, Jo Dene and Kristen Ann. Kristen is married and has a daughter, Kayla.

“My spiritual journey has been a constant in my life,” he says, “from being an altar boy in my youth to always attending church with my family.” He made his first Christ Renews His Parish renewal in 1984 in Cincinnati, teamed and put on the next renewal there. In 1985, Joe moved with his family and immediately attended another renewal to meet new friends and get involved at St. Francis Xavier. He went on to become the spiritual director for women’s Christ Renews His Parish teams, a role he has served for 20 years.

In 1991, he entered the diaconate and was ordained in 1994. He began working at the parish office in 1997, doing registration, teaching in the day school and PSR, teaching the baptism class and performing baptisms, teaching the confirmation class and offering spiritual direction. Both Georgia and Joe retired in 2013.

Hobbies include woodworking, golf, “and whatever Georgia tells me to do. Retirement gives us time with our granddaughter and for ourselves.”

“I have always prayed that if I could bring one person closer to Christ Jesus, my life would be complete.” 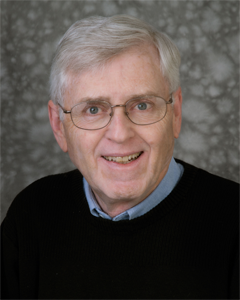